In order to meet the requirements for LTE networks, the evolved UTRAN (E-UTRAN) architecture has been improved dramatically from the 3G/3.5G radio access network (UTRAN). While legacy networks employed a hierarchical architecture, E-UTRAN uses a flat architecture. The functions of the eNB in E-UTRAN systems include not only base station (NodeB) functions to terminate the radio interface but also the functions of the Radio Network Controller (RNC) to manage radio resources.

According to 3GPP TR 25.912, E-UTRAN is described as follows:
“The evolved UTRAN consists of eNBs, providing the evolved UTRAN U-plane and C-plane protocol terminations towards the UE. The eNBs are interconnected with each other by means of the X2 interface. It is assumed that there always exist an X2 interface between the eNBs that need to communicate with each other, e.g., for support of handover of UEs in LTE_ACTIVE. The eNBs are also connected by means of the S1 interface to the EPC (Evolved Packet Core). The S1 interface supports a many-to-many relation between aGWs and eNBs.” 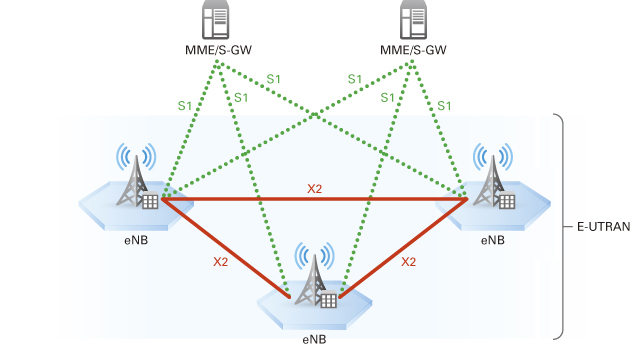