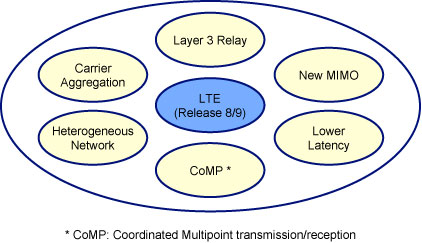 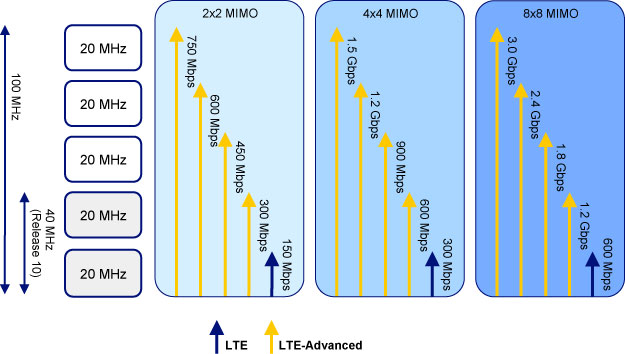 As LTE Rel. 10 UEs are backwards compatible with LTE Rel. 8 standards, the CA provides the advantage of reducing redundant implementation. An LTE Rel. 10 UE that is CA-enabled would achieve higher user throughput than an LTE Rel. 8 UE.

There are three types of CA, depending on the CC combination as shown in Figure 4. 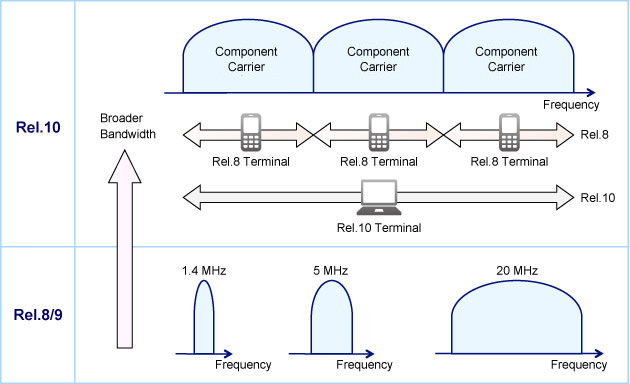 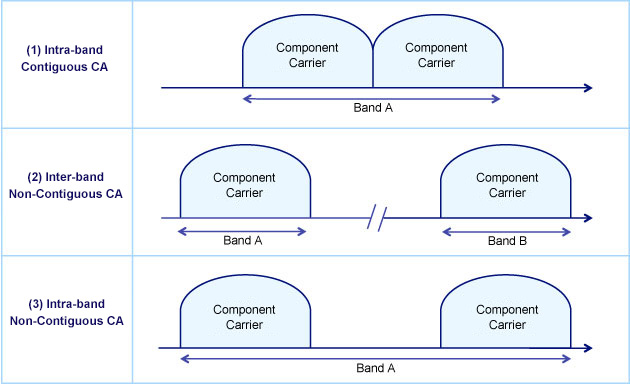 1. Intra-band Contiguous CAContiguous bandwidth wider than 20 MHz is used in this scenario. For example, wideband such as the 3.5 GHz band would fit this model.

3. Intra-band Non-contiguous CAThis scenario uses non-contiguous bandwidth in the same band. This model would fit operators in North America or Europe, who use fragmented spectrum in one band or share the same cellular network.

Coordinated Multi-Point transmission/reception (CoMP) is a DL/UL technique for improving system capacity and cell edge user throughput. Currently, there are two different approaches for CoMP (Figure 1). One approach uses autonomous, decentralized control and an architecture with independent eNBs. The second approach uses centralized control and an architecture based on Remote Radio Equipment (RRE).

In the approach with independent eNB architecture, CoMP is performed by signaling between eNBs. This technique can utilize legacy cells, but the disadvantages include signaling delay and other overheads.

In the second approach that integrates RRE, the eNB can centralize and control all radio resources by transmitting baseband data directly between the eNB and RRE on optical fiber connections. There is little signaling delay or other overheads in this technique, and intra-cell radio resource control is relatively easy. However, optical fibers may require significant CAPEX, and the central eNB must be able to handle higher loads according to the number of RRE. Therefore, both approaches are under consideration for LTE-Advanced.

In CS/CB, transmission to a single UE is performed by the serving cell, just as in non-CoMP transmission. However, the scheduling of transmissions is dynamically coordinated between the cells, including any beamforming functionality. In that way, the interference between different transmissions can be controlled and reduced. In principle, schedule optimization will be based on the set of users being served, so that the transmitter beams are constructed to reduce interference with other neighboring users while increasing the served users’ signal strength.

In Joint Processing, the Joint Transmission scheme transmits data to a single UE simultaneously from multiple transmission points. The multi-point transmissions will be coordinated as a single transmitter with multiple antennas that are geographically separated. This scheme offers potentially higher performance gains compared to CS/CB, but also places a high signaling overhead on the backhaul network.

Uplink CoMPUplink CoMP uses geographically separated antennas for receiving signals from UEs, and scheduling decisions are coordinated by multiple cells to control interference. The UE is not aware that multiple cells are receiving its signal, so the impact on radio interface specifications is minimal. Implementation of uplink CoMP largely depends on the scheduler and receivers in the cells.